What is Gir Cow?

Gir Cow is an important breed of Indian Dairy cattle breed. As the name suggests, this breed of cattle is a native of the Gir hills and the forests of Kathiawar which includes the Gujarat districts of Amreli, Bhavnagar, Junagadh and Rajkot.

In our country, there are many cattle breeds namely Red Sindhi, Sahiwal, Kankrej and Thar Parkar. These cows fall in the category of dairy (exclusive for milk), dual (milk-and-work-keeping) category and work animals according to their quality. Gir Cow is considered as the best among all other Desi Cows in India.

Gir cows are also called by other names such as Bhadawari, Desan, Gujarati, Kathiawari, Sorthi and Surati. Gir cow is a popular cattle breed even outside India, as they were imported by the United States, Mexico, Venezuela and Brazil.

The Gir cows are well-known for their hardy build and their extreme tolerance to conditions of stress and resistance to various diseases. Gir Bulls are used to pull all kinds of heavy loads and to plough all types of soil. 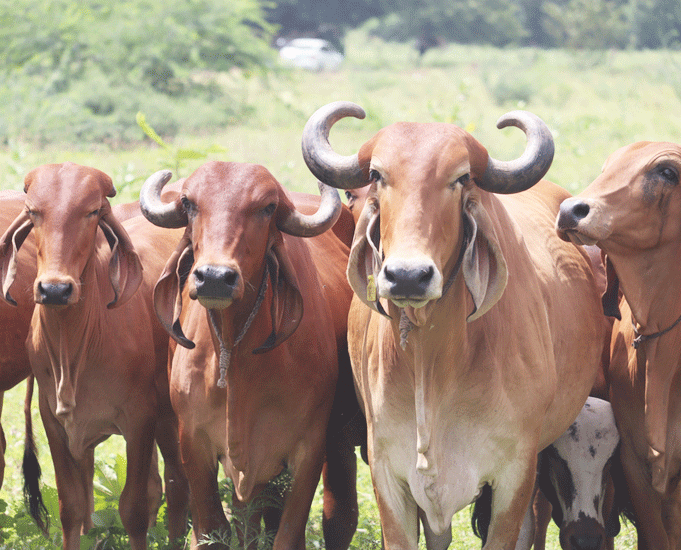 The Gir cows in general are very gentle, polite and love to interact with people. The cattle are very sociable and usually form a close circle at night. They are very protective and sleep with the calves sleeping under their heads.

On an average the Gir cow produces 6 to 10 litres of milk per day. Their milk production is between 1200-1800 kgs per lactation period. With a lifespan of around 12-15 years they usually give birth to 10 to 12 cows during their life. 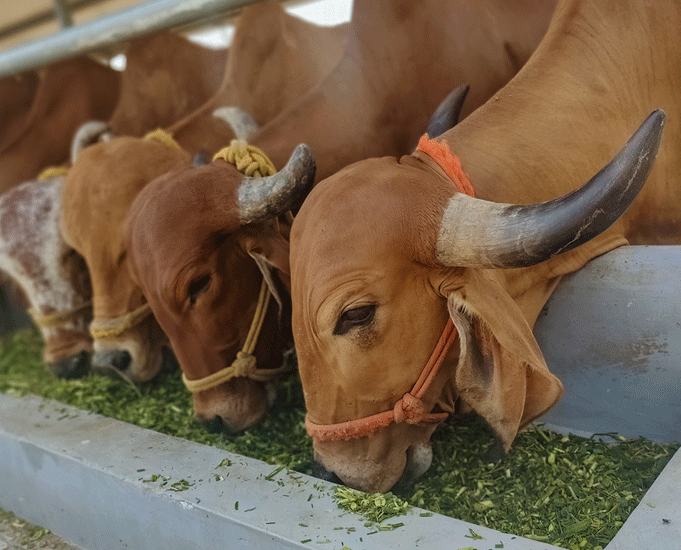 Weighing approximately 550 to 650kgs for bulls and 400 to 475kgs for cows, the gir cows are usually reddish in colour with white spots. The height of the Gir bulls is 1.35m on an average whereas the Gir cow’s height is 1.30.

Though they usually have red and white spots, the Gir cattle’s colour may varu from pure red to yellowish red to white. Their forehead is prominent, convex and broad like a bony shield. Their ears are long, drooping and shaped like a leaf with a knot on the tip.  Furthermore they have a long tail while the Gir cow’s horns are bent and turned backward.

Gir cows have a prominent hip bones and a high hump, which differes from other breeds of cows. Their hump has a specific vein called “Surya Ketu Nadi” which is not found it oter breeds. This Vein helps produce gold salts in the Gir cow’s blood when absorbing solar rays. These salts are in turn found in the cow’s milk and their bodily fluids.

Calcium, potassium, magnesium, phosphorus, fluoride, urea, phosphorus, ammonia. Urine of cows is used to wash the entrance of Indian houses as it is said to kill microorganisms.

Benefits of A2 Gir Cow Ghee

A2 Gir cow ghee is one of the most easily digestible dairy fat. It helps enhance the digestive property of the stomach, prevent constipation and helps detoxify our body. Pure Ghee contains butyric acid which helps nourish the cells of our intestine. Butyric acid also helps reduce inflammation while improving the health of our digestive system.

The Butyrate enemas and oral butyrate supplements found in Ghee are highly beneficial in treating diseases which can cause inflammation in our bowels. Some examples of diseases which can cause inflammation in bowel are ulcerative colitis and Crohn’s disease. Ghee prepared from milk of cows which have been fed organic grass is said to be rich in conjugated linoleic acid.

Even for those people who are lactose and casein intolerant, consuming Gir cow’s ghee will not cause any harm, as ghee is made from makkhan and does not contain milk solids. Casein is also present in very small amounts in Gir cow Ghee.

Many dieticians claim that ghee is really good for cooking, especially if you are frying food. This is because Ghee has a high smoke point. Other cooking oils generate toxic fumes when heated at a high temperature. But Gir cow Ghee does not react in the same way. Gir cow Ghee’s smoke point is about 500 degrees as against that of ordinary butter which is 350 degrees.

Ghee works as a natural moisturizer and does wonders for dry skin. It helps cure and smoothen dry and chapped while also curing rash, burn or dark circles around eyes.

Ghee is one of the most versatile and basic ingredient that is found in every Indian homes.

Importance of Consuming A2 milk during pregnancy

Why is A2 Milk the best choice?

Why are Gir Cow Ghee made using Bilona method the most nutritious?